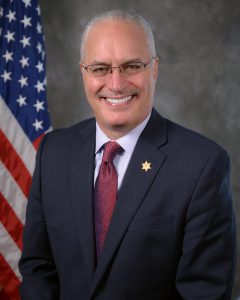 Daron Hall was elected to his sixth term as Davidson County sheriff in 2022. He made Nashville history by being the youngest person ever elected to the office and the longest serving. Sheriff Hall has made arresting the problem, not the person, a focus. He designed and implemented the first-of-its-kind Behavioral Care Center, a diversion program aimed at decriminalizing mental illness.

After 35 years of criminal justice experience, Sheriff Hall is seen as an expert in the field. He has been interviewed by national and international media outlets including the Wall Street Journal, the British Broadcasting Corporation, NPR, the New York Times, Fox News, CNN, and Fortune Magazine.